On April 9, Matt Torchinsky, Intraway’s Global Chief Technology Officer, Products & Technology, joined Tim McElligott, Senior Analyst at TM Forum, to explore some of the findings of the TM Forum Report on Automation and Autonomous Networks. They also discussed Intraway’s technology used by a CSP in Mexico to automate targeted areas of its operation.

Tim began the webinar by explaining who the respondents of the survey were. TM Forum carried out a targeted survey of CSP executives and technology leaders involved in digital transformation, operations management, and analytics. The survey also included suppliers and systems integrators supporting them. They received 79 responses. About 55% were from CSPs. The CSPs came from every part of the globe. More than a third were from China and the Asia-Pacific region, while another third were from Europe or Russia. The remaining respondents were spread evenly across the Americas, the Middle East, and Africa. They also conducted in-depth interviews with extra CSPs and supplier executives.

Would you like to watch the complete webinar on Network Automation Using Machine Learning and AI? Take a look at the recording here.

In the report, TM Forum asked CSPs to rank the top drivers for automation. Faster time to revenue is by far the top priority, with nearly 60% of CSP respondents choosing it as No. 1. CSPs consider automation will speed up revenue and reduce costs. Drivers such as faster time to market, supporting real-time services, and building out multi-access edge computing will all boost revenue. More accurate asset management and staff reduction are obvious ways to reduce costs. Proactive self-healing does both: Revenue results from better uptime and less staff is required for maintenance.

Tim went on to describe the six levels of autonomous networks, developed to measure the maturity and capability of autonomous networks. The idea is to help CSPs check their current level of maturity and explain how they can progress step by step, with each level building on the capabilities outlined in the previous. Defining what happens at each level makes the concept less nebulous and helps operators understand when to take the next step. 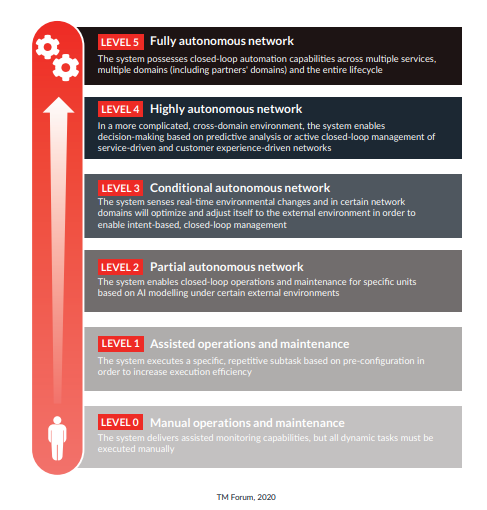 The Fate of OSS/BSS

As the industry progresses through several simultaneous transformations, including cloud, virtualization, microservices, and autonomous networks, the shortcomings of legacy OSS/BSS become evident.

However, most CSPs are not ready to abandon these systems entirely because they have made significant investments in them. Only 25% of CSP respondents said they are reducing investment in legacy support systems. More than a third are investing in them so that they can be incorporated into an autonomous network. 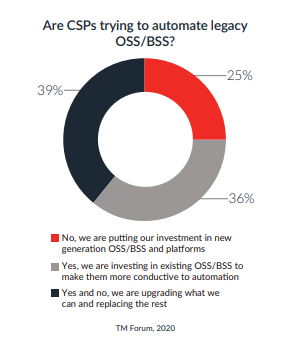 Then, it was Matt’s turn to tell the audience about an impressive success story with izzi, one of the largest cable operators in Mexico with a nationwide footprint. izzi aimed to offer new, premium GPON-based voice and high-speed data services in Monterrey. It had to do so rapidly to seize its market opportunity; its business case required a launch in no more than six months. The growing CSP didn’t intend to limit itself to Monterrey either; after a successful launch, the company wanted to expand its new services nationwide, which meant finding a cloud-native solution that could span its territories.

The Challenge of Automation 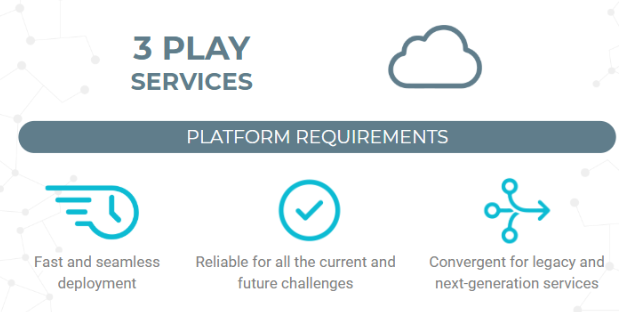 Aligned with izzi and Intraway’s vision, the best move was the deployment on the cloud. Following autonomous network concepts, izzi was looking for a platform that fulfilled some clear premises, such as inexpensive or stressful upgrades and implementations, supporting a zero downtime concept.

The platform had to be convergent for legacy and next-generation services since they were building their network and acquiring others. It also had to support automated flows and embrace zero-touch or bottom-up provisioning.

Amazing Delivery In A Complex Environment

Symphonica enables new NMS and Network Elements to be added in minutes through its design studio. The design studio simplifies the configuration of the southbound connectors through multiple protocols. Symphonica’s codeless approach enables users to create their workflows using a business process management (BPM) workflow machine. This replaces traditional programming done with an editor and manually typed syntax with a drag and drop interface that provides loops, conditionals, and protocol libraries like HTTP, SSH, Netconf, and more.

The northbound integration to izzi’s legacy systems was another significant challenge to take on. Intraway utilized the TM Forum Application Framework (TAM) to facilitate discussions that helped to adapt legacy functionality to the new solution approach and to define components and entities. This ensured the usage of a common language to describe each component’s scope, domain, and integration.

The program’s results were stunning. High-speed data was launched in the third month. Initial components were deployed and configured in the cloud in just one day, with all APIs, modules, and functionalities ready in less than 24 hours.

Once connectivity was established, connector testing took only 8 hours, including tests executed from Symphonica to different network elements. With connectivity between Symphonica and the fiber service platform in place, the first activation actions were performed in one day, using lab equipment.

While this program was underway, izzi also acquired another FTTH provider. Integration of its assets required only a month by reusing the integration and artifacts already in place. It was also possible to add a new NMS to existing provisioning flows in just three weeks, rather than the three months that would have been required with legacy approaches. izzi’s OLT Network Management system faced a challenge with multi-session handling, which Intraway solved in one week, rather than the two months required with the legacy system. Intraway also eliminated izzi’s dependence on third parties for modifying BSS interfaces with every product launch. By providing an independent means of changing process flows, with API-based abstraction and its codeless approach, Intraway was further able to reduce cost and accelerate time to market for new services for izzi.

Would you like to watch the complete webinar on Network Automation Using Machine Learning and AI? Take a look at the recording here.

Enabling AWS Adoption at Scale with Governance and Automation